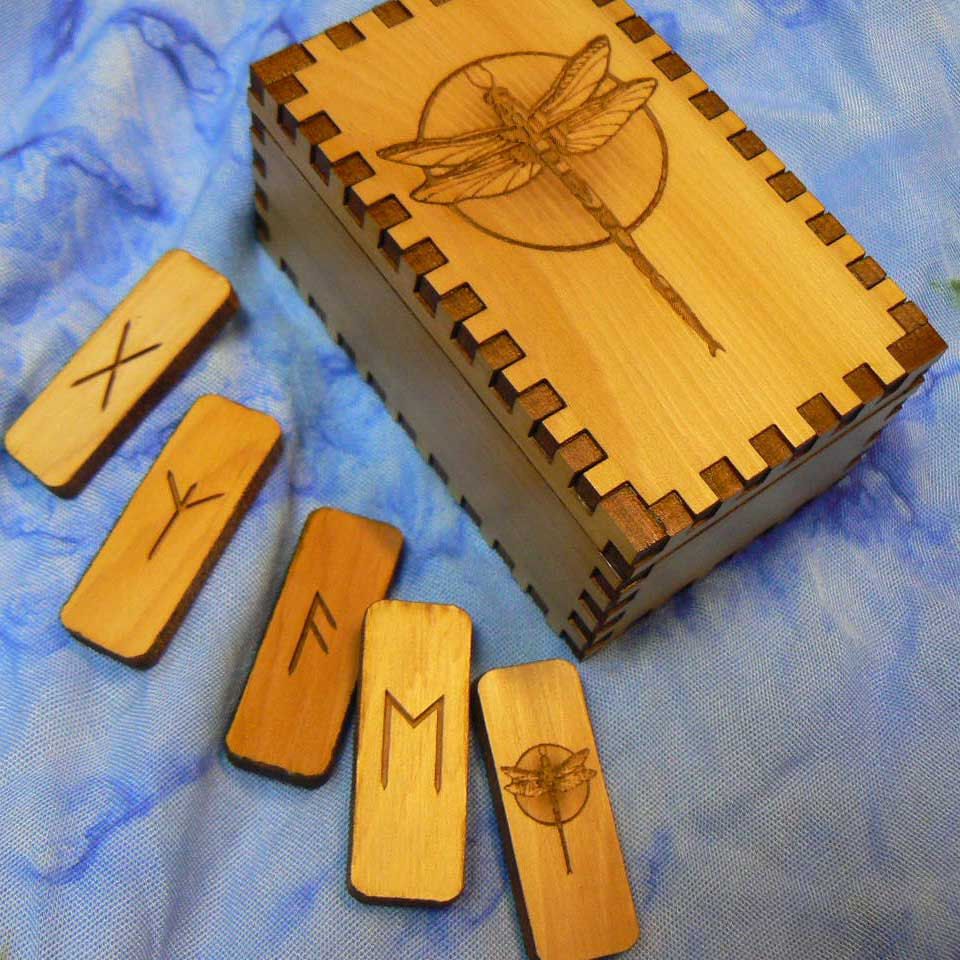 Hello, old friend. It’s been many years since I’ve taken you off my altar to consult you for your wisdom. And I think with this new chapter starting in my life, it’s past time that I did.

The runes and I go back to the time when I sat at the feet a local runemaster, Patrick. He is wonderful and Pagan and wise and quite comfortable in the pride in his sexuality as to his orientation. He’s gay, but in a way I have never found be flaunting and prancing and overly obnoxious. I have always admired and respected his wisdom to the point where when I ran our local Pagan meetup, I arranged for him to do a class on how to carve, bless, and interpret the runes.

I still have that beautiful set, safely tucked away in my witchy supplies. But this day I pulled out another set I purchased on Etsy that speak to me so deeply, I instantly fell in love with them the minute I laid eyes on them. Expertly laser-cut with the image of a dragonfly, how could I not be so drawn to them?

A set as light as air, as well as the box that contains them, this set represents the element of air and divination down to its very molecular structure. I have never held something made of wood that didn’t feel earthy until I get this set through the mail. It’s so incredible!

What will they tell me?

Now that I am returning to more active practice in my worship, I did a rune pull today after setting up my altar, lighting incense, casting a circle and saying prayers. It has been quite a while since I’ve gone to such lengths in ceremony, I am embarrassed to say, but that is in the past – a place never good to live in when one is moving forward to improve thyself. Here is the rune draw:

I would have done a full nine-rune spread as Patrick had taught us, but was short on time today. The nine-draw gives one a much better and more detailed view into the past, present and future circumstances and for me, that is always preferable. The three-draw, however, can also be very useful if they are interpreted with an objective eye and in relation to each other and the question asked.

Since it has been so long since I’ve done this, I will interpret them to the best of my ability as to the question I have for them.

This is a past, present and future spread, with the left-most position being the past and the right-most ending with the future. Or, as my Rune Master taught us, Left – Past or nature of inquiry, Middle – Present or forces manifesting, and Right – Future or outcome of the inquiry.

So, let’s take them one at a time, but I want to start first with the question I posed to the runes and why I asked what I asked.

Everyone ever born has wondered/wonders what their purpose in life is. It’s as inevitable a question to come up as the eventuality of death and taxes. The awful thing about this is that I have been doing what I was born to do ever since the 5th grade – and that’s tell stories. It’s awful because up until now I had never pursued it. Well, as of four years ago, I began writing again with a goal to make it public.

So my question was simple – is what I am doing right now – telling The Dragonfly Temple Chronicles and pursuing it as a project to bring to the world – the right thing to do? Will it be successful? Will it bring me prosperity?

In the first position of the past or nature of my inquiry is Raidho. My notes from my teachings tell us that, “Raidho is the run of travel, both mundane and special. It can be the journey of the soul through time, the ordered progression of life manifested by directed planning and doing. It can be cyclic, ordered, rhythmic, proportional, giving movement to the necessity of change. Slow and determined change, like the oak it represents, the becoming brought of perseverance and the acknowledgement that slow progress validates. The rune used by shamans for direction and protection while travelling to the underworlds, the slow beat, beat, beat of the rhythm of the drum. It can be the rider of the horse”.

Interpretation: this is certainly an appropriate rune to show up in this position of the question and the past for, at least what I believe, is obvious reasons. I have been writing since 5th grade. Considering I was held back a year because I was born after September, that would have made me approximately 12 years old, so that means I have been writing off and one for 45 of my 57 years – quite the long journey indeed!

And yes, it has absolutely been a journey of growth as I have improved my writing skills and styles over the years. While this offers me no insight into whether it will be success or whether I am on the right path, it’s appearance does tell me the runes understand the subject of my inquiry and are listening. Considering how long it has been since I’ve talked with them, I am glad this is what I can gather from it and its position.

The middle or present or forces manifesting position is held by Eiwaz. My notes on this particular rune say, “Eiwaz is a very powerful rune, denoting the world tree Yggdrissil. It is the tree of life, with its branches, trunk and roots reaching into the nine worlds of Norse mythology. It is your spine, the support and transit center for the energy that defines your life. It stands for the bow, used in the hunt, to help the user actively bring that which is needed to sustain life to him/her. Personal trials, life and death, connection of all levels of reality are embodied in this rune.

Interpretation: Eiwaz’s position in the middle suggests me to that its “branches” connect my present involvement with this project both to the past and the future – it is at once building upon a story I began way back in the year 2000 and have tinkered with all through these past 19 years, refining it, expanding it, making it solidly my story as far as the new direction it took from its original inception. And as branches never grow in one direction only, it will reach into and effect my future. Whether that will be for good or bad, is yet to be seen.

So now comes the one who’s interpretation I am most interested in – future or outcome of the inquiry. For this, Pertho came up, but in reverse. I have to throw the definition I would normally use out and use the reverse, which description I got from another source and which says, “Events stalled, you need to clear out something – unpleasant surprise – the old way has to come to an end.”.

Interpretation: not a fun thing to see for the future – or is it? My first thought on this rune’s appearance was that it points to a blockage that has to be cleared before I can obtain the result I desire for this project. That was a surprise to me because I had believed up until this point that changing my mind and attitude towards publishing it was removing the blockage that had prevented my publishing it.

Upon further reflection, I realized there may be another interpretation to this rune and the future. It might be validating the fact that, “old way has to come to an end”, which would mean, yes, the blockage has been removed, emphasizing that the future depends on me continuing to move forward and abandon the old way I have deal with this series of stories.

So which is it? Is there a new blockage that has appeared? I don’t believe so because the reception for this series has been nothing but positive so far…people have loved the free chapter previews, I already have a new patron and the YouTube channel is gaining subscribers at a steady rate.  If there was a blockage, I believe this rune would have shown up in the present position and not in the future one and none of these positive signs would have manifested yet.

I am satisfied with the interpretation at this point in time. It seems to indicate that I am going in the right direction. However, if I had wanted further clarification, I could to do another rune draw and for that, there are two other formations that are possible;

Let me know your thoughts on how I handled this interpretation of the sacred runes and just any thoughts at all you have by leaving them in the comments. If you want to follow my progress on the Dragonfly Temple Chronicles or better yet, support it with a donation, please visit my patreon page here. Thank you for taking the time to read this looooong post and blessings to you.