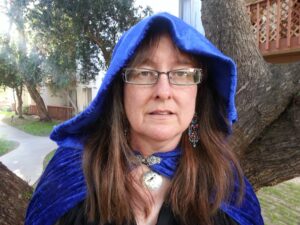 For way too long I had ceased listening to my subconscious, keeping the chatter of life’s mundane and unimportant tasks ever-present in my conscious. To say this was a mistake of EPIC proportions is quite the understatement. For the next 30 years, “she” reminded of her presence through dreams that were annoying at best, downright disturbing at worst.

Then something happened to me when I turned 50 – be it hormones, turbulent circumstances regarding the removal of toxic elements in my life or the fact that as a Capricorn it takes me literally DECADES to learn life’s lessons, I began to open up, to become aware of who and what I was inside and to let that shine outwards.

Much of that spilled over in the HUGE task of rewriting a story begun back in 2000. It gave the outside world a peek into what was lurking inside me that was fighting to get out. In its beginnings I could barely comprehend the import of what I was creating as my RP online friend was wrapped up in her own detoxification from other, unpleasant co-writers. There was the threat of us not continuing very early into the relationship and it very nearly died a premature death. I struggled to save it by giving in to her demands and adjusting to the situation to keep it alive. It was worth the compromise in retrospective, though four years after we had started I let it go and let us drift apart, tired of giving in to the stress of our dissimilar writing styles. This is not to say I don’t like her – she is still a dear friend who was going through the same bad experiences I had also had with another, less-tolerant writer. It was on that level we connected and through the wonderful role-playing we created, we healed each other and were able to move on.

As I write this next part, the ethereal, haunted tones of the female lead singer in the group Niyaz permeate the atmosphere with the song, “In the Shadow of Life”. Ever since the 1980s, I have collected the best of New Age, Electronica and Atmospheric music like this. It is this music that inspires me to write.

I have always firmly believed that a state of ceremonial, meditative bliss could be achieved with the help of three physical elements – candles, incense and music. If one wants to explore and experience the full mystery of our essences, take this song or others like it, go into a dark room with the aforementioned candles and incense, take a deep, cleansing breath and let them reveal to you the purpose of all life everywhere.

It is in this calm, peaceful atmosphere I began writing again, taking Whocate and her incredibly gifted but severely dysfunctional family into a new direction that reflected my inner self as it had evolved in that 10-year gap.

The sad, dark and passionate resonance of this next track I notice reminds me of the emotions that flood me when I write about Whocate’s physical family bloodline – the Whoticores. Listen if you will, to the track “Only Ashes” on the album “Found” by David Helping and Jon Jenkins. Sit back and imagine an elemental being so beautiful and compassionate, that beauty bleeds over into the souls of her Children, radiating outward into the world of Westwind Meadows and Whocate’s Valley. Her family, blessed with wealth, beauty and strong magickal powers, which promptly falls apart at her departure back to her realm. Even in the depths of their pain and suffering, there is still hope that one day they will be redeemed.