Book Review: Servant of the Underworld 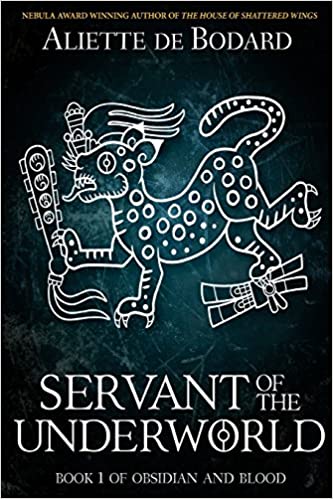 I just don’t read the volume of books I used to when I was single. A fact of being married and having way too many interests in life that vie for my attention. So, when I saw this book at a local literary convention we do the blood drive at every year, I picked it up, read the back cover and was mildly intrigued. An Aztec High Priest of the Dead looking for a missing Priestess? That caught my attention more than it being a murder mystery. Unlike my mother who had read all the murder mysteries in the San Mateo Library back in the 70’s, I typically have no interest in that field of reading, but being a Priestess of the Goddess of Death, well, you can see why I would take the chance and bring it home to give it a go.

I was naturally skeptical it would be a good read for one good reason – it was a freebie one received when getting their registration packet upon hitting the convention floor. Hmmm…have too many copies that didn’t sell in your warehouse, Angry Robot Books? It was a warning sign that either the book wasn’t good enough to be a better seller or the subject matter was too esoteric for most reader’s palates.

Turns out it was both reasons.

It starts out SLOW. The only thing that kept me reading were the descriptions of how the author pictured blood magic working in the ancient Aztec world. Considering how few outside of the pagan/occult world know how powerful blood is (the blood is the life, after all, and not just in the Bible, but in real life!), methinks the author must either be a closet occultist or has studied the mechanics of blood magic enough to tell a pretty accurate account in her book.

Now I know it takes a bit to set up the characters, the world they are in and the crime scene and suspects, but really, Aliette, did you HAVE to take 300 pages to do it??? No, it didn’t take THAT long (it took 160!), but it did take that long to get interesting enough I didn’t want to put the book down. *sigh*

If that wasn’t bad enough, the main character just wasn’t that interesting. He seemed slow to catch on to what was going on and let’s face it, assigning American English cuss phrases with Gods we are not even familiar with yet to an ancient culture just doesn’t work! (And she used them way too often in the first section of the book, to boot.)

SPOILERS BELOW. PROCEED ONLY IF YOU DON’T CARE ABOUT HEARING HOW THE BOOK ENDS!

Upon finishing the book, I was left with a vague sense of dissatisfaction and the impression that it was ONLY okay. It surprised me later to learn that the author was a Writer’s of the Future contest winner. Let me tell you, it wasn’t because of this book. Still, weirdly, the more I thought about it, and the more the days went by after finishing it up, it kind of grew on me in some vague, undefinable way.

Despite my irritation with the book’s nagging little quirks, I actually want to read the other two in the trilogy, Harbinger of the Storm: book 2

and Master of the House of Darts:book 3

. Mictlan knows why, but after all that character and world set up, maybe the payoff is in the end of the trilogy.